CENSE is the voice of the community for smart energy choices for the Eastside. We are volunteer-run and donor-funded, in our seventh year of meeting with city governments and the WUTC to challenge the need for Energize Eastside. Click to learn more…

Energize Eastside is PSE’s project to build a massive transmission line through Eastside neighborhoods. It has been promoted with a campaign of half-truths and scare tactics. Click to learn more…

Feb 7, 2021
Newcastle Hearing Update
The Newcastle Energize Eastside hearing continues to be delayed. CENSE is busy preparing for the hearing, which we are expecting to be held mid-2021. Check back frequently or sign up for our newsletter to be notified about the hearing.

Aug 3, 2020
CENSE files complaint with UTC regarding explosion & fire in transmission line/pipeline corridor
An explosion and fire occurred alarmingly close to the Olympic Pipeline in South Bellevue on July 20. The incident was caused by a discharge from PSE’s high-voltage transmission line into a tree that had grown too close to the power line. This is the same transmission line that would carry double the voltage if PSE builds Energize Eastside. Although no injuries occurred, CENSE and neighbors are concerned about the neglect that led to the event, as well as the inadequate response from PSE and Olympic. CENSE filed a complaint to the UTC on August 3rd asking for an investigation and preventative solutions. Read the letter to the UTC here.

In order to build Energize Eastside, PSE must get approval from Bellevue, Newcastle, and Renton. Each city must hold a public hearing to create the legal record for a decision. The outcome in any or all of the cities can be appealed to the courts. In Bellevue, the city council hears the appeal before it goes to court.

Bellevue
The Public Hearing on the south Bellevue segment was held in March 2019. After nearly three months of deliberation, the Hearing Examiner approved the project. Appeals filed by CENSE and four other appellants were heard by the Bellevue City Council on October 16th, 2019. The City Council subsequently dismissed all 5 appeals. CENSE then appealed the decision to the King County Superior Court in August 2020. After minimal consideration, the upheld Bellevue’s approval of PSE’s permits. For all the details, see our Hearing Information Page.
Newcastle
Early in 2019, Newcastle hired Synapse, an industry consultant, to perform an independent evaluation of the need for Energize Eastside. The consultant was also asked to study the safety risks of installing large poles very close to 50-year-old petroleum pipelines located near downtown Newcastle and several residential neighborhoods. The results of the study were expected in March 2019, but PSE has withheld crucial information that prevents the consultant from reaching conclusions. The study was finally published in April 2020 after PSE reviewed and made redactions. Newcastle’s public hearing continues to be delayed and wont happen until mid 2021 at the earliest.
Renton
Renton’s public hearing was held in January 2020. Despite testimony from CENSE and the public, the hearing examiner approved the permits. For details, see the Renton hearing page. 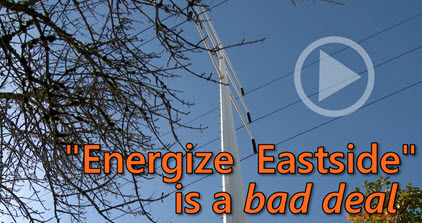 In 3 minutes, you will get a quick overview of CENSE, Energize Eastside and CENSE’s vision of better ways to provide the Eastside with reliable electricity. Help us spread the word. Please share with your friends and post on your social media.

and we’ll keep you up to date on Energize Eastside and our efforts to promote better solutions.

Spread the word! Tell your neighbors about CENSE and Energize Eastside.

Donate to CENSE so we can represent you in the legal battle against Energize Eastside!

Your donation helps us to represent you in our promotion of smart energy choices for the Eastside.